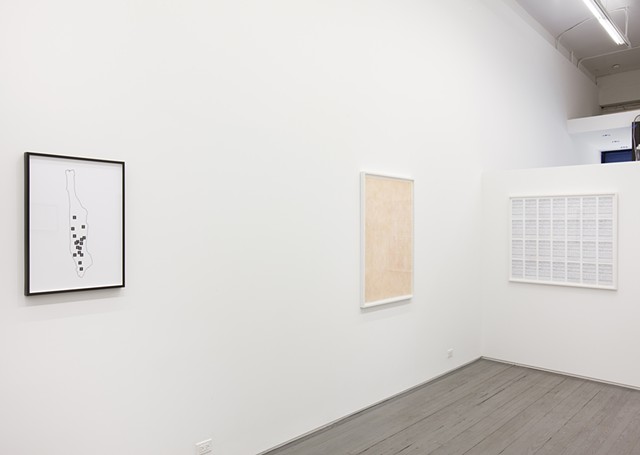 For her solo show, “Aesthetic Relations,” New York artist Cindy Hinant used the cosmetics chain Sephora as a place of artistic inquiry. As conveyed by its title, the show questioned the principles of relational esthetics, and suggested dispersions beyond the walls of sanctioned art spaces. Through mixed-medium works shown in the gallery and actions occurring at Sephora stores, the artist suggested that a meaningful group esthetic experience is possible-and perhaps more probable-in a non-art environment.

In contradistinction to the sensory overload of Sephora’s perfumes, powders and paints, Hinant’s show was quietly unadorned. Three wall pieces, two books and a stack of post¬cards, all in black and white, comprise the “Sephora Project” (2012). The data-based works included Hinant’s grids of charts cataloguing the varieties of esthetic and social exchanges that she had at Sephora. The artist filled out one chart every time she visited the store, tracking information such as the free samples she acquired and her conversations with salespeople, for example, “Was asked by Sephora employee to have hair curled-served as model for cosmetic product.”

An edition of 500 postcards designed by Hinant and distributed, guerrilla-marketing-style, at various Sephoras, allowed the artist to put forth less defined propositions. The front of the card shows a map of Manhattan dotted with the Sephora logo, and the back lists the addresses for every location. While Hinant’s expressed intention is to open up possibilities for relational esthetics, this gesture raises a perhaps inadvertent question: At what point does critical exploration become mere promotion? –