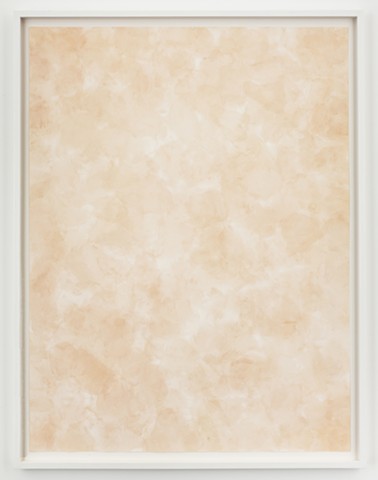 Hinant has also created a series of MakeUp Paintings that further on the legacy of minimal monochrome works and conceptual art’s ritualistic processes. MakeUp Painting (2011) at first glance looks unremarkable, like a flesh-colored monochromatic work. Upon closer inspection, the viewer sees tonal variations and fluctuations in the opacity of the pigment. The artist creates these works by a daily ritual of blotting her made-up face against paper hanging on the wall of her studio. This daily act one might say in the vein of masquerade that many women adhere to while formally resulting in a Minimal aesthetic, also takes its cues from conceptual practice. One need only think of first-generation conceptual artists as diverse as On Kawara and Eleanor Antin who used daily rituals to create works of art. In Kawara’s I Got Up (1970), the artist sent two postcards daily to colleagues and friends between the years of 1968 and 1979; each card was stamped with the words “I Got Up” and the time that he awoke in an intimate yet structured action. Some recipients got one postcard while others consecutively received hundreds.22 During the same period, Antin produced the landmark feminist work Carving: A Traditional Sculpture (1973), where the artist was photographed in four views (front, left, back, right) over the course of 37 days while she intentionally lost ten pounds. The work is shown as 148 black-and-white images in a grid that reads from left to right, like the frames of film. Making reference to the male-dominated tradition of sculpting marble, where a reductive method is used to chisel the human form, Antin made this work in response to art history. It was also a retort to the Whitney Museum of Art’s invitation to participate in their biennial, whose guidelines stipulated that only painting and sculpture could be shown.

Hinant’s MakeUp Paintings are created with a similar ritual as both earlier precedents; the artist applies her own set of rules and constraints. While the twentieth-century works rely on strict formal and procedural documentation, the younger artist uses the notion of chance and performance. Seen in close proximity the works look almost expressionistic and embrace a controlled chaos. Like Kawara’s work, the MakeUp Paintings form an intimate, existential diaristic presence. They also give credence to the daily ritual of studio practice in today’s digitally entrenched world. While Hinant lives in a so- called “post-studio” era, she acknowledges the importance of this designated space and time for creative production. She also acknowledges the discipline required to be a successful artist, something suggested by Antin’s work, which so succinctly references many of the issues of being a female artist in the 1970s. Hinant reflects on these themes in her work: young women still struggle with many of the same issues that feminist artists of the 1970s were grappling with, including women’s diminished role as objects of a male gaze; the notion of being a “woman” artist and therefore at a disadvantage to a male artist; and personally, the decision of whether to wear makeup and adhere to societal beauty norms. Coco Fusco has written about her “being looked upon with skepticism by the director of the women’s center at my college (always clad, by the way, in grays, brown, and tans), who could not understand how I could be a budding feminist theorist in fishnets, pink mini-skirts, and purple hair.” Hinant’s work seems to echo Fusco’s in its refusal to adhere to any predetermined constraints of feminism.